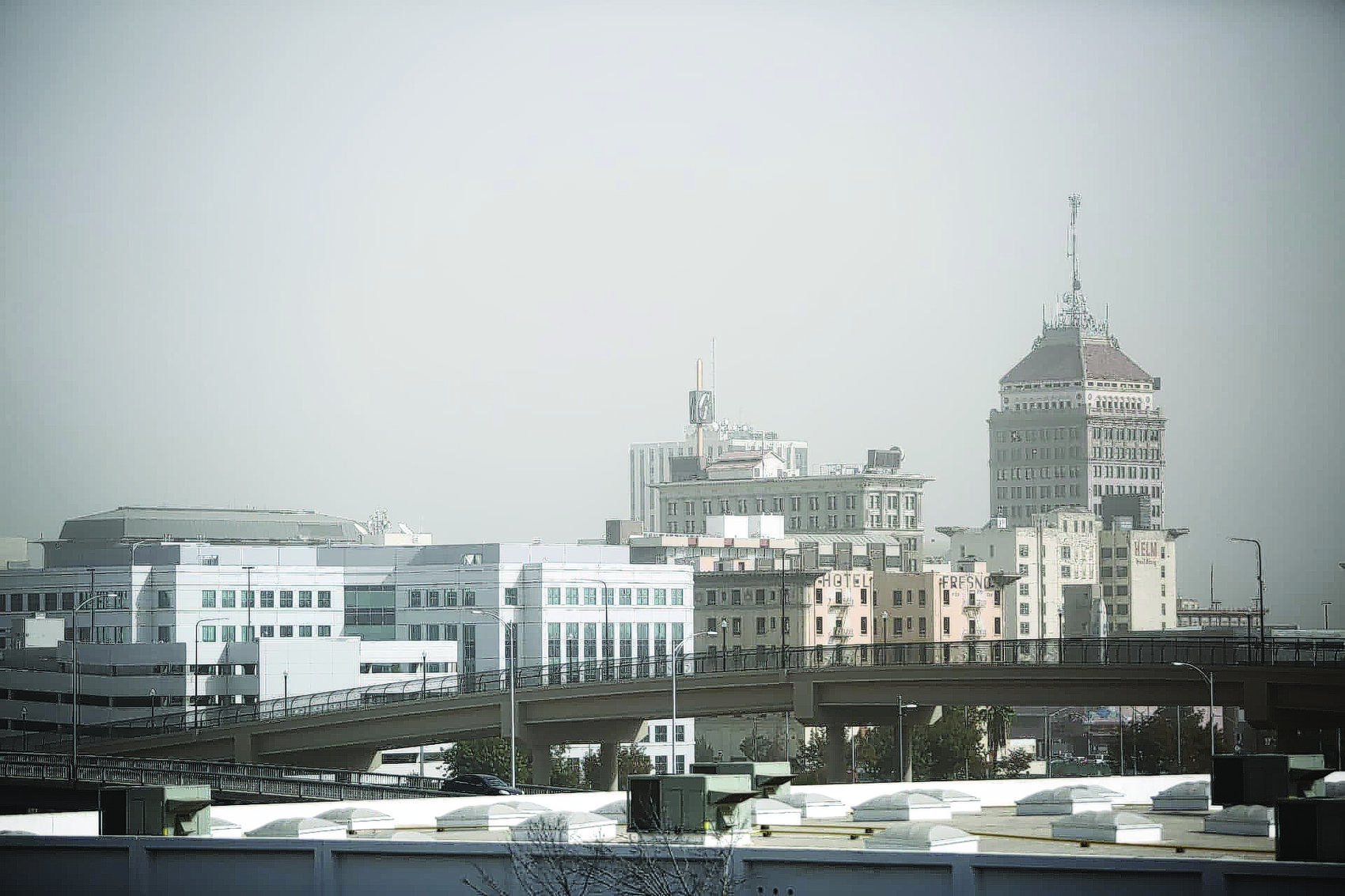 Downtown Fresno as it appeared one day in late September 2020. Smoke from the Creek Fire put the area under a pall. A federal appeals court has ruled that the EPA erred in approving a 2018 San Joaquin Valley air pollution environment control plan.

A federal appeals court has ruled that the Environmental Protection Agency erred in approving a portion of a 2018 San Joaquin Valley air pollution control plan.

The 9th U.S. Circuit Court of Appeals found that the Valley regulators did not have enough money to clean up particulate pollution as detailed in their plan.

The conservative-leaning three-judge bench found that the shortfall of funds – up to $2.6 billion – was so large it wouldn’t buy enough air mitigation technology to pass EPA muster.

The April 13 decision underscores the failure of both federal and state agencies: not only the EPA under the Trump administration and the San Joaquin Valley Air Pollution Control District, but also the California Air Resources Board. This is the third failure in the last six months for the Valley’s watershed 2018 PM2.5 plan.

Calling the basis for EPA approval of the plan speculative, the court stated that the EPA “fails to provide evidence or reasoned explanation for its conclusion that California will be able to fulfill its commitment.”

“Because these speculative assertions are unsupported by evidence, they fail to ensure that California and the District have a plausible strategy for achieving this [2006] portion of the attainment strategy,” the court decision said.

The court case is part of a spate of lawsuits filed by Sierra Club, Medical Advocates for Healthy Air, National Parks Conservation Association, and Association of Irritated Residents, all challenging the EPA’s approval and stewardship of the Valley’s 2018 PM2.5 plan. Through these lawsuits – one of which is still pending – the groups are seeking to compel the federal government to enact a far-reaching intervention to clean up Valley air, which ranks as the worst-in-the-nation for particulate pollution.

More than a year later, the EPA, now under the Biden administration, has yet to put forward such a plan. The environmental groups accuse the EPA of ignoring one of the Clean Air Act’s most important mandatory provisions – keeping derelict state regulators accountable – and that the agency needs to “step up” to its legal mandate to implement a federal clean air plan for the Valley.

“The EPA is already under an obligation to adopt a federal plan for fine particulate matter in the Valley,” said Greg Muren, a Harvard-trained lawyer with Earthjustice who represented the petitioners in the case. “They haven’t done that for the last year, but that’s what we’d like to see.”

“It is frustrating that our allies had to go to court to get the agencies that are supposed to be protecting us to meet their most basic planning obligations,” said Nayamin Martinez, executive director of the Central California Environmental Justice Network, in a news release.

“Environmental justice communities deserve clean air, and we need more than vague commitments from the state to get us there. We’re grateful the Court agrees that our health is important.”

In the late 2010s, the EPA required the San Joaquin Valley Air Pollution Control District and the California Air Resources Board to submit a pollution control plan because of its failure to meet every federal PM2.5 air quality standard. The Valley air district is the only air basin in the country to have earned such a distinction of underachievement which included the 1997 PM2.5 standard, the 2006 PM2.5 standard, and the 2012 PM2.5 standard.

PM2.5 particles are a federally regulated pollutant linked to premature death, childhood autism, asthma, Alzheimer’s and impaired cognitive functioning. The San Joaquin Valley has, by far, the highest concentrations of PM2.5 pollution in the United States. Public health experts have estimated that the Valley’s toxic levels of PM2.5 particles annually kills 1,200 people and costs the local economy billions of dollars.

The emissions reduction program Valley air watchdogs submitted to the EPA in 2018 was contentious. The plan contained more speculative emissions reductions than any clean air pledge ever approved. Many of these pollution control measures Valley regulators tried to adopt in the plan have in the last few years either failed, been rejected by courts and the EPA, or withdrawn.

The 2018 plan’s efforts to come into compliance with the 1997 annual standard were almost entirely disproven by the EPA last November. Another ruling by the EPA disapproved of the Valley’s back-up pollution control measures for the 2006 and 2012 standards. In March 2021, CARB withdrew their contingency measures for the 1997 standard. And the court decision means that the Valley’s measures to meet the 2006 PM2.5 24-hour rule do not meet EPA standards.

Of the two portions of the 2018 plan that have been approved by the EPA, one of them aims for Valley air quality to lapse into more severe classifications of non-attainment for the 2012 PM2.5 standard. The only section in the 2018 plan that successfully achieved a clean air standard was for the 1997 24-hour standard.

This series of disapprovals, quantitative failures, and inaction have left behind a minefield of potential federal sanctions and interventions under the Clean Air Act. Starting this year, all new regional transportation plans in the Valley are federally categorized as nonconforming.

More sanctions could be on the way. Valley regulators have 18 months to get EPA approval for a new pollution control plan to rectify its failure to meet the 1997 annual standard. If they don’t, the EPA is required to dictate that for every pound of emissions that the air district permits at a new or modified facility, the air district must scrub 2 pounds of emissions from somewhere else. And if the Valley can’t get its plan submitted and approved in the next two years, the federal government will freeze nearly all highway funding.

CARB and the air district say that it was only a single sensor in Bakersfield that failed the 1997 health standard. Jaime Holt, an air district spokesperson, said the district is “conservatively” evaluating the impact of stagnant weather conditions and drought on air quality and is calling on the federal government to provide new emissions reductions from cars, trains and planes.

“While the District and CARB continue to move forward with measures, additional help will be needed from the federal government to further reduce air pollution from mobile sources that make up the majority of the Valley and state’s criteria, air toxics, and greenhouse gas emissions,” Holt said in a statement.

But according to an EPA document, the Valley’s raw data showed that more than half of the Valley’s 15 sensors failed the 1997 annual standard in 2020. While this is true, Holt said, the air district and CARB recalculated the data to exclude the impacts of wildfire smoke. The EPA, however, has never signed off on such a recalculation.

The environmental groups backing the EPA lawsuits say that it is time for the Biden administration, which prides itself on its progressive credentials, to address the Valley’s “environmental justice crisis.” Despite a decades-long track record of failure to attain the 1997 annual standard in the Valley, Muren said “residents are not getting a substantially revised plan.”

“They’re not getting legally required EPA intervention. They’re just getting more of the status quo,” Muren said. “And that’s just not acceptable, particularly for an administration that’s expressed a commitment to environmental justice.”

Gregory Weaver is a freelance journalist based in California’s central San Joaquin Valley. He can be reached at gweav37@gmail.com. This story was written in partnership with the Fresnoland Lab at The Fresno Bee.